Chapters Through a Lens

Follow Chapters Through a Lens on WordPress.com
Leave a comment Posted on October 17, 2014October 19, 2014 Into the blue

Close encounters with the beauty of the ocean

It was writer and undersea explorer, Arthur C. Clarke that said, “How inappropriate to call this planet Earth when it is quite clearly Ocean.” I agree with him. About 71% of the earth’s surface is covered by water and the oceans hold about 96.5 percent of the Earth’s water content. More than 95% of this underwater world remains unexplored, with countless species co-existing in this vast abyss. 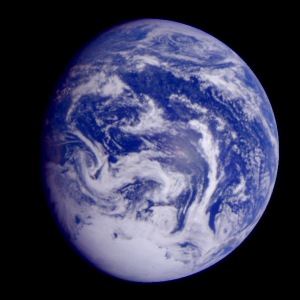 There is an entire world right below the surface of our oceans. A world that exists completely independent of our technology, our politics, our religion, even our mere existence. Science fiction has taught us that the truth is out there, but what about the truth that’s down there? Down below, in the darkest corners of our deep blue seas? I’ll give you a clue. It looks something like this.

Okay, so maybe our neighbors would be far too happy if we joined them down there in the great blue beyond, preferably for dinner, I’d assume. But a weekend away at the bottom of The Mariana Trench (approx. 11 Km deep) would be detrimental to us humans, since we are only capable of diving up to 700 m below the sea’s surface in a fully kitted diving suit.

Besides the creepy creatures lurking in the dark, cold abyss, there are hundreds of thousands of species that exist in our oceans today. Many of which are beautiful, unique and captivatingly interesting. No need to fret. You can still get a glimpse of life under water, without having to worry about being eaten alive, running out of air or being crushed by that pesky oceanic water pressure. An amazing source of images (and information) on underwater wildlife is the Seaphotos website (see link at the bottom of this page) which showcases breathtaking images captured by the acclaimed photographer, author and naturalist, David J. Hall.

His most recently published book, the National Outdoor Book Award (NOBA) winning, Beneath Cold Seas: The Underwater Wilderness of the Pacific North West, features elegantly shot images as captured by Hall, as well as an introduction by marine biologist Sarika Cullis-Suzuki.

Specifically focusing on cold water marine life, this book aims to refute the widespread belief that these creatures are dull and uninteresting. Here’s a look at some of the stunning images you will find in this truly fascinating and inspirational book. 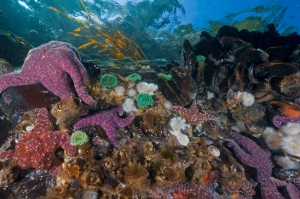 Ochre Sea Stars (Pisaster ochraceus) are most common in the intertidal zone and are often seen in tidepools and clinging to rocks above water, at low tide. Several of these stars appear to be feeding on mussels. Also seen in the photograph made just beneath the surface, are white plumose and green surf anemones.
Browning Pass, British Columbia

The ocean is a truly amazing and vital part of our planet. Love Planet Ocean and support biodiversity so that our future generations won’t have to marvel at images like these whilst wondering why life in the ocean became extinct.

For more information and pictures from the depths below, you can visit the following links: